Parents, family members, self-advocates, community partners and other volunteers are the driving force of The Arc Montgomery County.  Through their advocacy come the dreams and philosophy which influence The Arc's core values and its ability to shape public policy.

The Arc Montgomery County was launched by a group of parents who started a day program for their children with disabilities. As the years progressed, the parents' group became more visible and active on disability issues. The organization incorporated as the nonprofit Montgomery County Association for Retarded Children (MCARC) in 1958, and ran a preschool as its first direct service program.

The organization underwent several name changes over the years, as its mission expanded to include adults and the national organization voted for terminology changes. In 1992, the agency became “The Arc” deleting the word “retarded” from its name as the result of self-advocates' efforts.

The last two decades have been a time of expansion, especially in the area of children's programs. In 1991, The Arc launched the Family and Infant Child Care Center, a unique nursing and child care program for infants with severe medical conditions. In 1992, the Karasik Child Care Center opened its doors to include children with and without special needs. In 1998, a partnership with the Boys and Girls Clubs of Greater Washington led to the opening of After All, an inclusive after-school program for youth and adolescents.

In 2001, the agency began providing Community Supported Living Arrangement (CSLA) services. These efforts allow for individuals to live independently and receive direct support in their own homes. The Arc continued to look for new ways to create a more inclusive community and to broaden its comprehensive services. In 2007, The Arc opened The Arc Recycling Solutions and in 2009 opened its first Thrift Store.

For 60 years, The Arc has been serving the Montgomery County community, supporting more than 4,000 individuals annually with a broad range of comprehensive services. 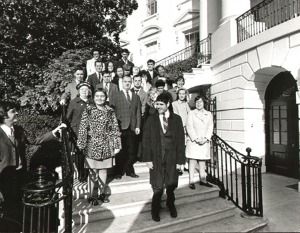 Self-advocates and family members visited the White House in 1975 to advocate for the rights of people with intellectual and developmental disabilities.